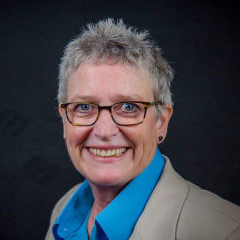 Karyn Lathan spent over 25 years in law enforcement and corrections as a Police Officer, Correctional Officer, Probation and Parole Officer, and the Restorative Justice Coordinator for Arizona Department of Corrections. She is an Air Force veteran, with service in the Security Forces [military police] in South Korea and stateside. She currently serves as the Chair of the Tempe Family Justice Commission, and was the driving force in its creation in 2014. The Commission promotes access to justice and safety for victims of domestic violence, dating violence, sexual assault, stalking, and sex trafficking. Karyn holds a Baccalaureate in Business Administration with a concentration in Public Administration from the University of Phoenix.

Karyn ran for state representative in 2012 in Arizona Legislative District 17, a district that was considered too Republican to be won by a Democrat. Her candidacy and the activism it inspired closed the gap, and the district is now considered a competitive one. In 2013, Karyn attended the Emerge Arizona candidate training and has been a proud Emerge sister since then.

She relocated to Tempe in District 18 in 2014, and has been active there as a Precinct Committeeperson, State Committee member, board member, and delegate to the 2016 Democratic National Convention in Philadelphia. In January 2017 Karyn was elected a Vice Chair of the Arizona Democratic Party. She has traveled around the state as part of their 15-County initiative, encouraging people to become involved, and to consider running for office.

Karyn is the Constable in the University Lakes Justice Precinct, an office that has not been held by a Democrat in over 15 years. The precinct includes nearly all of the city of Tempe. Other interesting facts about Karyn:

She loves dogs [well, who doesn't?]. She is a top-notch dart thrower. She creates beautiful beaded jewelry, and has a large treasure trove of beading supplies. She learned to ride a motorcycle before she drove a car, and has ridden them her whole life, including all the way across the country several times. She is a passionate, fearless foodie, and an excellent cook. She has lived all over this country, including in Alaska and Hawaii. There's more. Ask her about her trip to Thailand.....